Nearly 50 percent of catfish feed comes from leaves, it turns out that growth remains stable until the harvest arrives. Even the mortality rate (livestock death) is very low. All of that uses EM4 technology.
The high price of catfish feed, makes farmers cultivated catfish inflamed, because of a large feed capital but little profit or even loss. But for the people of Gunung Kidul, they do not run out of ideas. By using EM4, large capital to buy catfish feeds become lighter and can even reduce feed costs by 50 percent.

It was Sugiatno, the head of Kedungdowo Wetan Hamlet, Pampang Village, Paliyan District, Gunung Kidul Regency, Yogyakarta who anticipated the high need for catfish feed by providing additional feed that was easily obtained in the form of leaves. Without leaving the feed from the manufacturer, the catfish that were given these leaves grew large and healthy, up to a harvest of 60 days or 2 months. “So this is a new breakthrough in the world of catfish farming, in providing a decent profit. The reluctance of the community to cultivate catfish due to the very high feed costs but with feeding technology plus EM4 provision in maintaining their health, the community will be more interested in cultivating catfish, ” said the Village Chief who often gave his presentation to groups of fish farmers in his area.

The composition of feeding is 50% factory feed and 50% leaves. Although initially experimenting, Sugiatno also conducted research or observations on the behavior of catfish that were interested in any food when they were hungry, because catfish also liked leaves, so they tried by planting wild water spinach on the pond. And it turns out, the catfish, which is 2 weeks old, eat the water spinach. Because catfish likes to eat foliage, then Sugiatno chooses foliage which has high vegetable protein content. He obtained the raw materials from around his house such as turi leaves and lemtoro or Chinese bananas. From the results of his research, turi leaves and lemtoro contain 27.6 percent vegetable and lemtoro contain 36 vegetables, 5% additional feed of foliage.

Leaf feed is given when the catfish is 2 weeks old. Previously, turi leaves are dried in the sun for one day, after that it is crushed into small pieces and then only given little by little to the catfish, after the catfish wants to eat the new leaves are given routinely. Not only turi leaves, other leaves are also given. Almost all types of leaves in the village can be used as catfish feed. Among others, papaya leaves, cassava, kale, lemtoro and others. In a day, every 6000 catfish are only given 4 kg of pellets that are given EM4 as much as 10 cc. Pellets are given in the morning (at 8.00 – 9.00) as much as 1 kg, just to move. Then in the afternoon the catfish is given leaves. Pellet feeding is repeated at night (10 pm) as much as 3 kg to provide additional energy to overcome the drop in ambient temperature. 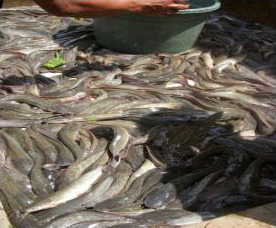 Catfish fed with leaves tend to be smaller in size compared to catfish fed, but the meat is harder and heavier. Even tastes better and the physical will look cleaner. No wonder if the size of catfish 8-10 for the farmer level, the price is more expensive than weigh of the catfish produced normally. “This is organic catfish and the selling price is quite high,” he said. Not only that, with EM4 application in the pool once a week, the pool does not smell. “Sometimes I use the remaining dirt in the pond for fertilizer,” he said. So what are you waiting for, you want the catfish to be healthy? Just use EM4 products that have been proven capable of providing health to catfish during cultivation.(A)